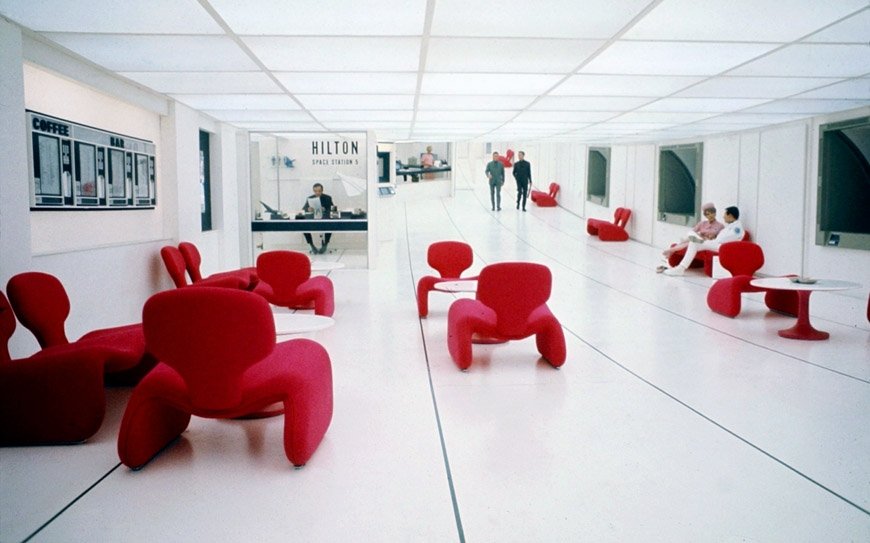 It can sometimes feel like a bit of a struggle to find visual inspiration when in lockdown. We’ve spent weeks being confined to our own homes with our permitted daily outings for exercise, but we no longer have the option of going to galleries, shops or theatres. For the vast majority of us, internet streaming services have been our lifeline. Films and TV are a great source of visual inspiration, whether it’s for the costumes, cinematography or interiors. With this in mind we’ve put together a list of our favourite interiors in both TV and film to inspire you over lockdown, enjoy!

The much anticipated directorial debut from fashion designer Tom Ford depicts a stunningly stylish 1960’s Santa Monica setting. Julianne Moore’s character Charley’s house steals the show with it’s chic 60s decadence, while Colin Firth’s character George’s house is a spectacular example of mid-century modern architecture. It was designed by the famous architect John Lautner for the Schaffer family, aptly named Schaffer House. The set design is unique and occasionally lavish whilst being typical of 1960’s style, and was created by the same team behind the set for the television series Madmen.

This 1960’s classic is famous for it’s groundbreaking set design due to it’s innovative futuristic style. The Red ‘Djinn’ chair was designed by Olivier Mourge in 1965 and was specially selected to be featured in the film by director Stanley Kubrick and his team. Since then the chair has become a historic furniture design staple, having been one of the first examples of creative product placement in TV and film.

Directed by Alain Resnais, this eerie French drama is set in an isolated luxury hotel which is actually Nymphenburg Palace, located near Munich in Germany. This stunning baroque palace is even bigger than Versailles, and it’s architecture and interiors are shown off perfectly in this stylish film. Designed by Italian architect Agostino Barelli, the palace was created in 1675 and only took 11 years to build, which is rather impressive when you consider the size and design of it.

This 1971 James Bond film was probably one of the most stylish of the series, and that’s due to it featuring the famous Elrod House. The property was designed by renowned American architect John Lautner for interior designer Arthur Elrod in 1968, and is an example of the free architecture style which combines nature and architecture together. The site was recently sold to a buyer in 2016 who apparently paid almost $8million in cash for the exclusive home!

The chic cafe known as Café des 2 Moulins is title character Amelie’s place of work in this 2001 cult classic. Since appearing in the film the cafe has become a tourist attraction, and with its endearing retro styling it’s a perfect photo opportunity. Amelie was nominated for 5 academy awards for its art direction and cinema photography and remains one of the highest internationally grossing French film in history.

Starring, directed and written by Jacques Tati, this visually stunning film tells the story of a mans crusade against modern design. The filmset was built from scratch by artist Jacques Lagrange, who was known for his impeccable use of colour. The film itself is a comedy that criticises modern day consumerism, to quote the director “Our world becomes every day more anonymous… and is in the process of becoming an enormous clinic”.

Who could forget Wes Anderson when it comes to visually inspiring films? The director is famous for how he uses colour to create mood and atmosphere, and his set design has been the inspiration for hotels and restaurants – such as the Pink Zebra hotel in Kanpur, India. The iconic zebra wallpaper that appeared in The Royal Tenenbaums inspired a demand for zebra wallpaper designs, with many wanting to replicate Wes Anderson’s quirky visuals in their own home.